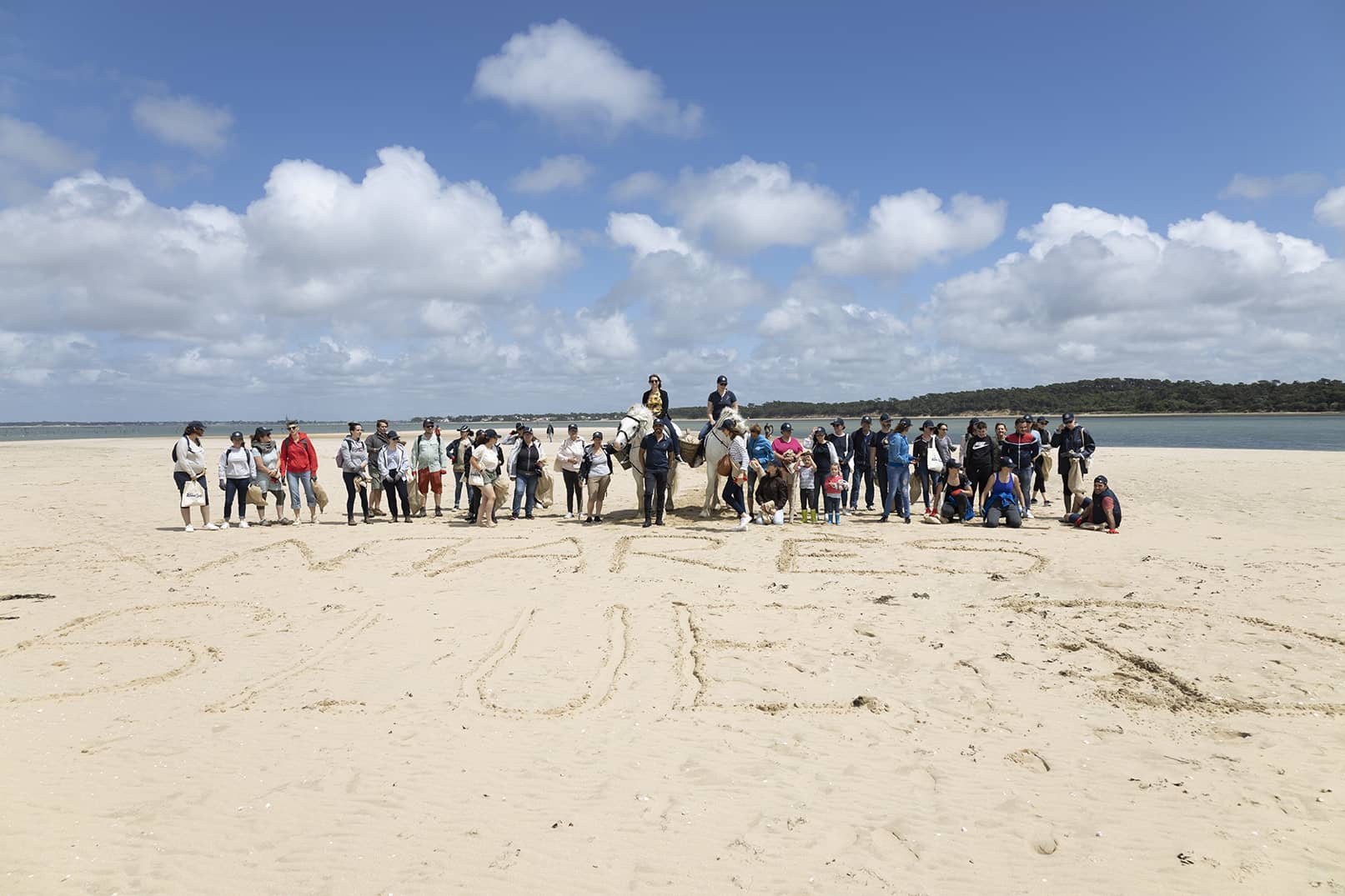 8 June is World Oceans Day. Oceans cover 70% of the Earth’s surface and are the lungs of the Earth, yet between 8 to 12 million kilos of plastic waste find their way into our seas every year. Our environment is the first to suffer from this pollution.
The aim of World Oceans Day is to raise awareness about the importance of preserving the marine environment. So, to celebrate this event, we created “Antarès Blue Day”. Here’s a look back, with some photos, at this team day where everyone pulled together.
We’ll also take the opportunity to give you some handy tips to cut the amount of plastic you use (if you aren’t already doing so).

Antarès campaigns for the oceans with “Blue Day”

On Wednesday 8 June, the Antarès team met up at La Tremblade beach to pick up litter washed up on the shore.

Kitted out with jute sacks and gloves, all the staff dived into this race against waste. From our starting point at Le Galon d’Or, our beach clean covered 5 km to finish at La Temblade water sports centre. Our hoard of rubbish weighed in at an estimated 25 kg before being placed in skips provided by La Tremblade Town Council.

But “Antarès Blue Day” isn’t just a beach clean. There’s also a French-made, hand-printed tote bag made from GOTS-certified organic cotton produced from organic agriculture. Both practical and robust, the bag is ideal for everyday use. It also supports a good cause as €3 from each bag sold goes to the “Les Sabots du Cœur” Association.

Why should we protect the oceans?

Well, there’s pretty fundamental point. 50% of the oxygen we breathe comes from oceans. However, if you still aren’t convinced, did you know that they absorb 90% of heat generated by human activity and 30% of greenhouse gases? These sources of carbon subsequently regulate global climate.

Let’s also not forget that the seas and oceans harbour a wealth of biodiversity (we still haven’t discovered all marine species).

Finally, we benefit greatly from oceans in several ways, such as food, transport, trade, energy and tourism, etc.

How can we protect the oceans?

There and many things we can do on a daily basis to limit our impact on the environment and especially for oceans.

Cut down on the amount of plastic you use

On average, we produce 300 million tonnes of plastic every year. Yet, there are many small things we can do every day to reduce this number, such as swapping plastic bottles for a flask, buying loose, using a tote bag, solid shower gels or shampoos and replacing plastic containers with glass jars. If have to use plastic, make sure you dispose of it properly so it can be recycled.

Microbeads are most commonly found in cosmetic products such as body scrubs but, given their size, they are very difficult (or almost impossible) to recover. From our bathrooms, microbeads mostly end up in our oceans and in the stomachs of fish.

Don’t drop your cigarette butts on the ground

They might look harmless but they are a real scourge for the oceans. According to the water information centre, 40% of the 137 billion cigarette butts thrown away each year end up in the oceans. Did you know that one single cigarette butt can contaminate up to 500 litres of water? The best thing to do is to dispose of your cigarette butt in a litter bin or a pocket ashtray.

Eat types of fish that are not endangered

Many species are over-fished and threatened with extinction. Choose the fish you eat carefully. Try to buy French-caught fish or offshore-farmed varieties rather than fish-farmed species. Doing so follows ocean cycles and limits the chances of some species disappearing altogether.
See the guide from Greenpeace.

Beach cleans enable you to take part in a specific activity that helps the environment and makes a visible change. Picking up litter protects flora and fauna in places you might use for your leisure, when out walking or on holiday.

You’ve got to admit that it is much nicer to spend time on a fine sandy beach than a rubbish-strewn shore.

Antarès Blue Day helped the entire team do something useful for the environment and we’re keen to start planning next year’s event.

Many thanks to Hassen, Artiste and Hulk for cheerfully taking part, as well as to Valérie Claude and Marie Raulier at Royans Community Tourist Information Office for their contribution.

Free shipping in Europe for this tote bag.