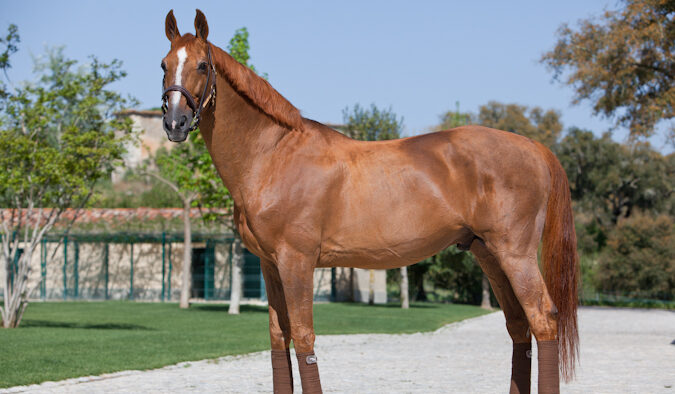 “Few people had high hopes for him… He didn’t have the right look“. Baloubet du Rouet was 3 years old in 1992 and hadn’t (yet) swept people off their feet. As Yannick Fardin, grandson of Louis Fardin (who bred Baloubet) explains, the lofty colt with his head held high, didn’t have the chance to shine in stallion events. Yet, just a few years later, he was to become one of the most prominent Selle Français horses in the history of show jumping and more generally, equestrian sport. He was the only horse to have won the World Cup Finals 3-times running, ridden by Rodrigo Pessoa. So, let’s have a look back at the story of this sturdy, tenacious chestnut coated legend.

Baloubet du Rouet was born in 1989 at the Louis Fardin stables in Juilley (Manche). His sire was “Galoubet A” and his dam, “Mésange du Rouet“, both Selle Français breeding stock. With that pedigree he was on a good many people’s radars and Baloubet was sold to Doctor Blanchard, who entrusted him to Remy Bourdais.

The young stallion’s physique wasn’t to everyone’s liking and that was putting it mildly. His high head position and ‘pigeon-throated’ neck meant that he couldn’t compete in 3-year-old stallion show-jumping events (riding competitions back then were held the day after entering hand-class events, if they qualified). As a result, he was let go due to his anatomy.

This didn’t stop the Coutinho family having a real crush on Baloubet and they duly bought him on the cusp of his 4th birthday.

As Baloubet’s rider, Rémy Bourdais, explains, the Coutinho family made a decent offer on his 4th birthday and we couldn’t afford to reject it. I’m grateful that the family (Ed. Portuguese) left me alone to work with him when he was 4 and then when he turned 5. At 4 years old, he was gangly and uncoordinated, nowhere near the finished article. People were laughing behind my back but I ignored them. When he was 5, he had progressed so well that there were always three people asking me to take him out on the track. Yet, you’d have had to be a genius to guess what would happen next. When he was 6, I booked SHF events for his new rider, Nelson Pessoa, who wasn’t very familiar with the system in France“.
Source: l’Eperon https://www.leperon.fr/Sport/Saut-d-obstacles/Mort-de-Baloubet-du-Rouet-disparition-d-une-icone-.

While calm and peaceful out of the arena, Baloubet du Rouet had a very forceful personality which made him quite tricky to mount. That said, he had his own blend of strength and drive that earned him unparalleled success.

Rodrigo Pessoa and Baloubet du Rouet: A match made in heaven

When he was 6, all the work by the French rider paid dividends. Now, ridden by Nelson Pessoa, Baloubet qualified for the World Championship finals, became French Champion at 7-years-old and was a finalist in the World Equestrian Games in Rome, the same year, in June 1998.

These victories were just the start of a long list of successes for Baloubet.

After Rome, Baloubet was passed on to Nelson’s son, Rodrigo Pessoa. It took just a few months for this iconic couple to excel. For instance, they won the 1998 FEI World Cup Final in Helsinki and a further two times, one after the other, at Gothenburg in 1999 and Las Vegas in 2000. Baloubet is still the only horse to have won three World Cup Finals in a row. That same year (2000), he also won the bronze team medal at the Olympic Games in Sydney. In 2001 and 2003, he came 2nd twice at the World Cup.

Yet, it was in 2004 that he reached his zenith when the couple took the individual gold medal at the Athens Olympic Games.

His record of achievements also includes winning the Top-10 Finals twice, numerous victories in five-star Grand Prix events (winning twice at Bercy in the Grand Prix World Cup, Bordeaux, Geneva, Rotterdam and Brussels, etc.). In all, he amassed over 65 victories in international competition

Making him one of the most successful show jumping horses in the world.

In 2006, the champion, Baloubet, bowed out and went into retirement. He subsequently took on a new career as a sire where once again, he had a fine record. Listed in 5 stud books (Selle Français, Hanoverian, Holstein, Oldenburg and Belgian), he sired a whole host of champions, such as Chaman, Balou du Rouet 4, Palloubet d’Halong, Sydney Une Prince, Querlybet Hero and many others. Highly-prized Europe-wide, Baloubet became a beacon of pride for French horse breeding and the proof of Normandy expertise.

Baloubet had his own style and left a lasting mark on the riding world. His fiery enthusiasm and way of playing in the arena is a lasting memory for riders alike. Nevertheless, the sheer talent of the chestnut champion continues to shine in show jumping arenas through his progeny.